Lagos State government has approved an additional insurance company to join the league of insurance companies that underwrite annuity business for retirees in the state.

Managing Director of the company, Niyi Onifade, told a media parley in Lagos on Saturday that the approval resulted from the company’s customer-centric service delivery since it began operation in June.

He said that the experience shared by customers was instrumental to building the confidence of the state government in the company, hence the approval.

He noted that the life assurance firm was dealing in annuity and ready to do more in spite of the fact that many insurance companies were opting out of the annuity business.

Onifade said that the firm was also collaborating with insurance brokers in the industry because they played a dominant role in the industry and their acceptance had been very encouraging.

“We are not focusing only on the cities, but on the hinterland and merging both traditional and digital skills together to penetrate better into the market,’’ he said.

He added that the insurance firm was committed to its mission and vision to make insurance achievable and the lifestyle of every Nigerian.

In her remarks, the Acting Managing Director of another insurance subsidiary of the same holding company, Dr. Adaobi Nwakuche, said the newly-launched insurer had made its products very simple and affordable.

“We are 100 percent focused on the customer from the point of contact of purchase to the point of paying claims because our mandate is to democratise insurance,”

“We pay careful attention to the needs of every customer across all the social circles while designing our products,’’ she said. 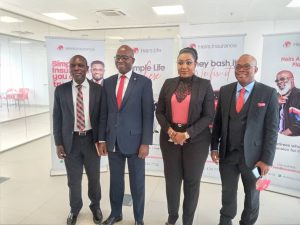 With paid-up share capitals of N10 billion and N8 billion respectively, the two subsidiaries began full operations in June with a mandate to underwrite all classes of general and life insurance.

The holding company is a pan-African investment group with presence in 23 countries worldwide.