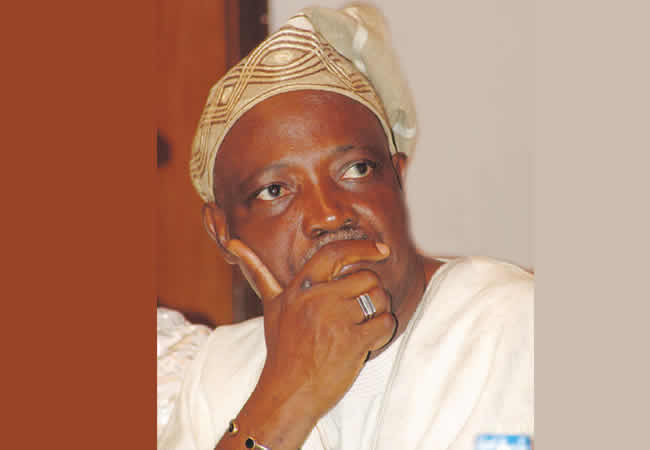 Members of the Olubadan-in-Council met on Tuesday (today) to ratify the Otun Olubadan of Ibadanland, Lekan Balogun, as the new Olubadan.

However, a former governor of Oyo State, Senator Rasidi Ladoja, was absent at the meeting.

Ladoja, who governed the state between 2003 and 2007, is the current Osi Olubadan of Ibadanland.

The absence of Ladoja and some other kingmakers reportedly affected the announcement of a new Olubadan.

Some of those at the meeting were the Balogun of Ibadanland, Owolabi Olakulehin; Tajudeen Ajibola; Eddy Oyewole; Abiodun Kola-Daisi; and Lateef Gbadamosi Adebimpe.

The President-General, Central Council of Ibadan Indigenes, Chief Oluyemisi Adeaga, was also at the meeting.

The kingmakers shunned journalists waiting to hear the outcome of their meeting.

Meanwhile, Adeaga in a press statement on behalf of the Central Council of Ibadan Indigenes, urged people to stop speculating about the emergence of the new Olubadan.

Part of the statement read, “This medium is also being used to appeal for caution and calm by all and sundry who have severally engaged in expressing various views and opinions on the ascendancy of a successor to the now vacant throne. Many people have either openly or otherwise demonstrated his/her passion for Ibadanland and this is appreciated.

“However, the arguments and discussions have been found to be both unnecessarily preemptive with daily developing acidic contents, thus fanning the embers of enmity and discord among the hitherto loving people in the Society, in contradiction to the good intentions of all the parties involved.

“We sincerely appeal to all members of the public that this avoidable negative trend should be stalled and we have therefore decided that henceforth, all sons and daughters of Ibadanland and our concerned friends should cease further comments, publications, and or arguments on the matter and leave the issue till Ibadanland would resolve its issue as it has always been done.

“Let us assure you all that the Olubadan in Council, the body vested with the authority to recommend the right candidate to ascend the throne will, at the appropriate time, act justly, while the Executive Governor of Oyo State, in whom the authority to approve the candidate so recommended for installation lies, will, as usual, be prompt and righteous in discharging his Executive Authorities.”

Ten members of the Olubadan-in-Council had last Wednesday unanimously agreed that Balogun is the next Olubadan.

The Otun-Balogun of Ibadanland, Oba Tajudeen Ajibola, had said on Sunday that the Tuesday meeting will ratify the choice of Balogun as the new Olubadan.

Share
Facebook
Twitter
Pinterest
WhatsApp
Linkedin
Email
Telegram
Viber
Previous articleMembers Of APC Group Tackle Each Other Over Sharing Of N250million Mobilisation Fund
Next articleTV licence discounts: How to reduce your bill by 50 percent or get it for free | Personal Finance | Finance