HomeNAIJAAFCON: Why we lost against Nigeria -Egypt coach, Queiroz
NAIJA

AFCON: Why we lost against Nigeria -Egypt coach, Queiroz 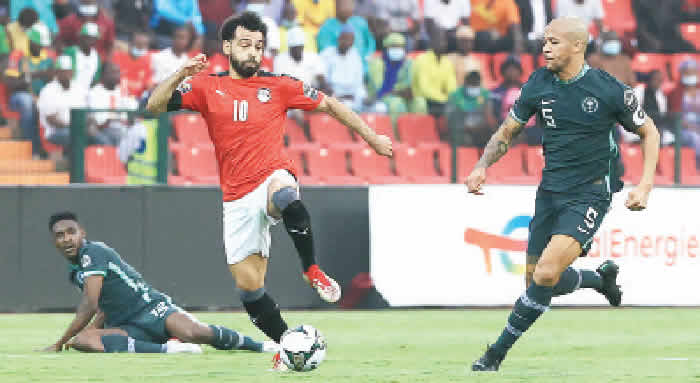 Egypt coach, Carlos Queiroz, has said his team’s poor performance in the first half of the Africa Cup of Nations encounter with Nigeria caused Pharaohs’ loss.

He said this during a post-match interview.

According to him, Pharaohs were no where to be found on the pitch in the first half.

He said, “The performance in the first half was very poor and this is the truth, we were not on the field. We started playing in the second half and there was no reason for this failure and loss against Nigeria.

“We lost this match but there are 6 points we must get against Sudan and Guinea Bissau to qualify.”

A sweet 34th minute belter, intelligently struck by Kelechi Iheanacho and off a brilliant headed pass by Taiwo Awoniyi, earned Nigeria a first-ever opening match win over Egypt at the Africa Cup of Nations as Cameroon’s northern town of Garoua dazzled in green and white on Tuesday night.

Former U-17 World Cup winner Iheanacho ran hard at the North Africans’ defence a number of times in a pulsating first half clearly dominated by the three-time African champions at the Stade Roumdé Adjia. But it was the dimunitive winger Moses Simon, who plays his club football in France, that threw the Egyptians’ rear into jeopardy several times with his dancing, taunting and inexhaustible bag of tricks, and it was his penetrating pull-out from the left that resulted in the game’s only goal.

The Eagles played with gusto, zest, immense confidence and go-go spirit – not seen for such a long time, and with Olaoluwa Aina and Zaidu Sanusi firm at both wing backs, Kenneth Omeruo and William Ekong surefooted in the central defence, Wilfred Ndidi and Joe Aribo disciplined and focused in the middle, the Pharaohs were literally at sea.

Upfront, Iheanacho was a constant threat with his lively runs, and Simon dazzled to no end with the Egyptians unable to decode him for the 90 minutes he was on-pitch before giving way to Alex Iwobi.

Taiwo Awoniyi thought he had made it 2-0 in the 47th minute when his header saw the ball kiss the crossbar and was then spirited away by the goalkeeper. Nigeria called for a VAR review but Senegalese referee Papa Gassama looked away.

Eight minutes later, the seven-time champions cleared desperately from the line as a brilliant Moses Simon, Ndidi and Iheanacho combo almost resulted in a goal, and a minute later, Iheanacho should have scored as a run full of pizazz by Aina had the Egyptian defence in knots. Five minutes later, Aina shot well over the bar as the Eagles dominated to an embarrassing degree.

In the 65th minute, Iheanacho came very close from a snap free-kick, and at the other end Aina was in good time to block as Mohamed Salah cocked the trigger in the vital area. Eleven minutes later, via another counter-attack, substitute Chidera Ejuke was foiled by the goalkeeper.

In time added-on, Ejuke peeled away from his marker and latched on to a brilliant pass by Kelechi Nwakali, but the ball was blocked on the line with the goalkeeper lost in the wilderness.

Three precious points was the reward for the Eagles, as they look forward to their second match of the competition against Sudan’s Falcons of Jediane on Saturday.

The match marked Nigeria’s 94th match at the Africa Cup of Nations, and her 51st win, having drawn 22 matches and lost 21. On their part, it was Egypt 101st match at the AFCON, during which they had won 57 matches, drawn 17 and lost 27.