How Eagles rated against Pharaohs 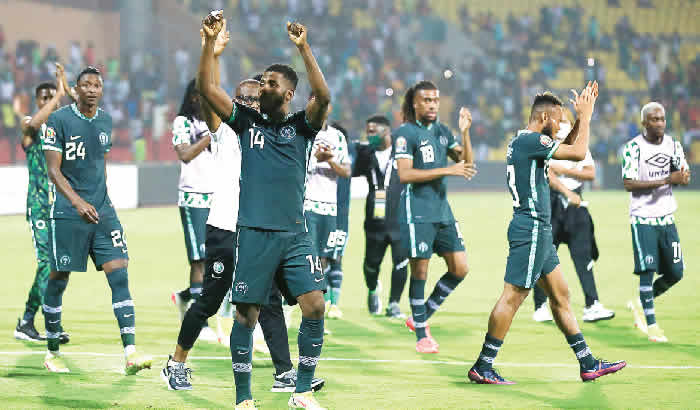 The Eagles kicked off their opening Group D game at the 2021 Africa Cup of Nations in Cameroon on Tuesday with a 1-0 win over seven-time champions Egypt 1-0 in Garuoa. JOHNNY EDWARD rates how the players fared in the encounter

It was a proud evening for the Sparta Rotterdam keeper but unexpectedly, the 22-year-old had a quiet outing on his AFCON debut. He did make two saves. He also denied Mohamed Salah a goal in the 70th minute with his.

Ola Aina: The Torino wing-back played one of his best games in an Eagles shirt. He was involved with all of the Eagles’ play from the right flank and rarely put a foot wrong. He should have an assist for his efforts but Kelechi Iheanacho’s heavy touch denied the Leicester City forward a simple tap-in in the 74th minute.

Kenneth Omeruo: With little to occupy him defensively, the Leganes defender pushed forward, got on the ball plenty and distributed it well. He made two interceptions to deny Mohamed Salah from scoring. He partnered William Troost-Ekong well in central defence before was replaced in the 79th minute after copping an injury. RATING: 6

William Troost-Ekong: Posted a decent performance but his blushes were saved by Okoye after he was beaten with a pass from Ahmed Sayed, which Salah failed to take advantage of.

Zaidu Sanusi: The FC Porto defender churned out a disciplined performance as they restricted Liverpool winger Salah to just one shot at goal.

Wilfred Ndidi: The Leicester midfielder was full of energy and made numerous runs to support the attack. He provided an option and created scoring opportunities for the team as they launched attacks on several occasions.

Joe Aribo: Made the assist for Iheanacho’s opener in the 30th minute and helped the Eagles keep possession in midfield. The Glasgow Rangers midfielder formed a good partnership with Ndidi in the heart of the Eagles midfield.

Kelechi Iheanacho: Deployed in his favourite position playing off the main striker, Iheanacho posed a danger wherever he popped up. He scored the winner for the Eagles on the half-hour mark, an early contender for goal of the tournament, but was guilty of some misses. RATING: 8

Samuel Chukwueze: A tough night for the Villarreal winger as he was ineffective in the encounter and hardly created chances. RATING: 4

Moses Simon: He will be criticised for failing to deliver a final ball or two, but the flip side of the same coin is that Simon, time, after time threatened the Egyptian right-back and was a menace to the Egyptian defence all through.

Taiwo Awoniyi: The Union Berlin striker was full of energy on his AFCON debut and was unlucky not to have scored with a header. He gave Mahmoud El Wensh and Ahmed Hegazy a torrid evening before he was replaced by Sadiq Umar.

Semi Ajayi: Came on for the injured Omeruo and helped shore up the Eagles defence as the Egyptians piled on the pressure late on.

Chidera Ejuke: Had an instant impact coming on for Chukwueze in the 72nd minute and was denied two goals by Egyptian keeper Mohamed El Shenawy. RATING: 5

Umar Sadiq: Made his debut for the Eagles, replacing the impressive Awoniyi but did not get a chance to show his worth. RATING: 3

Alex Iwobi: The Everton midfielder came on for Simon in the 90th minute and did not do much to be rated.

How Three Governors Colluded With Security Operatives Who Killed Over 1,000 South-East Residents – Report