Behind the Venezuelan opposition’s victory in Chavismo’s cradle 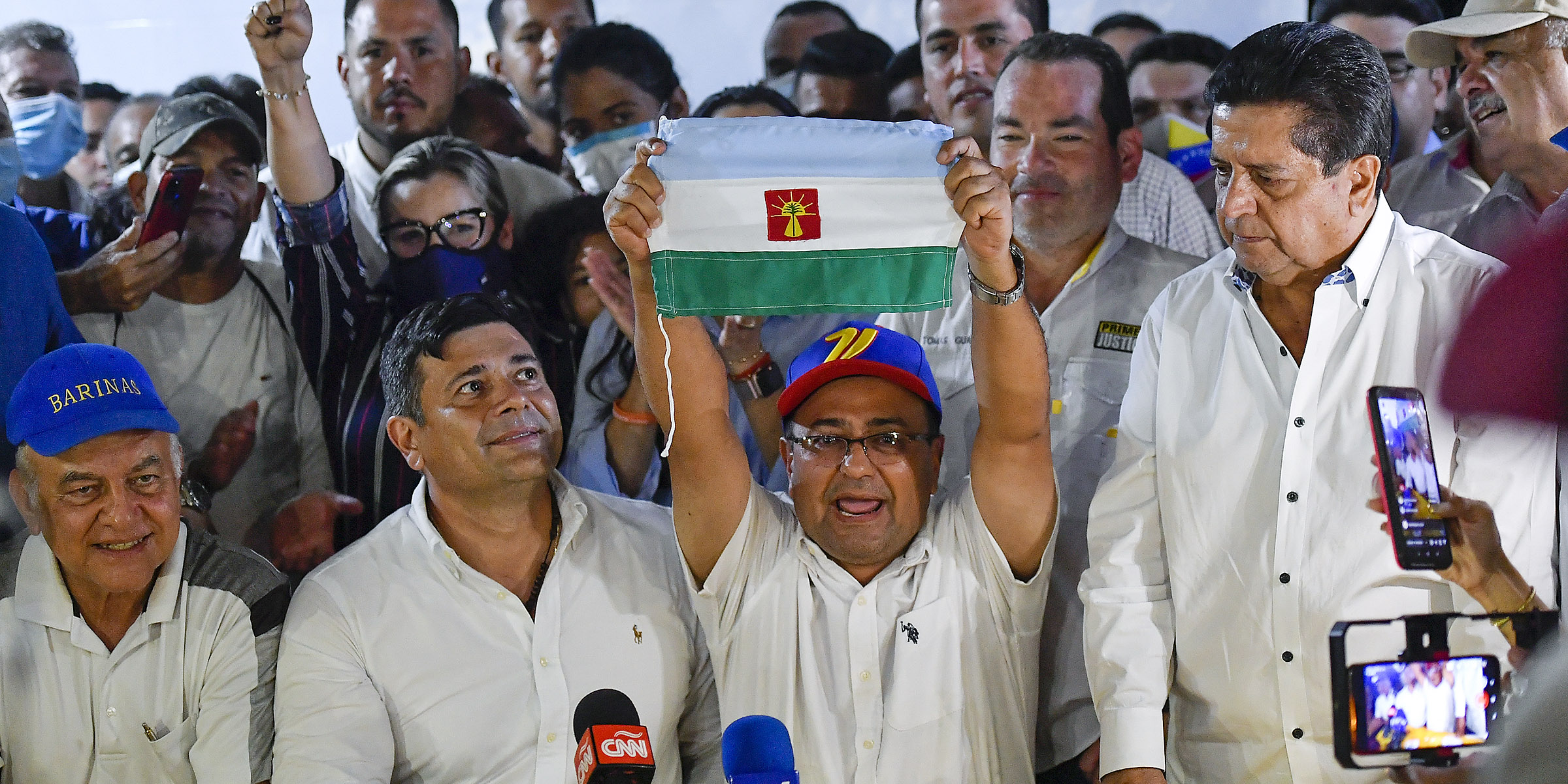 The joy was palpable in every corner of his city on Monday, José Robles said.

“We had been waiting for this for a long time. The elections drew a smile on the face of the people,” he said speaking from Barinas, the home state of the late Hugo Chávez, the leader of the “Bolivarian revolution” that ushered Venezuela into socialism.

On Sunday, opposition candidate Sergio Garrido won the regional elections in Barinas, becoming the first governor of that entity that does not belong to the Chávez family, nor to the ruling political movement, since 1998.

Although in the November elections the ruling party prevailed in 19 of the country’s 23 states, the fight to win the special elections in Barinas became a point of honor for the government of President Nicolás Maduro.

It was also a test case for the opposition, whose strategy emphasized a local and unified message that could be a harbinger of what can be achieved in future elections.

“We are the proof that votes matter. The people of Barinas accepted the challenge democratically, and now we are a state of hope for Venezuela,” Garrido said in an exclusive interview with Noticias Telemundo. “We must not be afraid because together we can overcome adversity.”

There were certain factors, experts said, that contributed to Garrido’s victory.

Why is Barinas so important to Chavismo?

Since 1998, that state has only been governed by relatives of Chávez: His father, Hugo de los Reyes, was governor for three election cycles, and then he was succeeded by Chávez’s brothers — Adán Chávez, the current Venezuelan ambassador to Cuba, and Argenis Chávez.

“I am 30 years old and have lived under Chavismo for 22 years. I have no knowledge of anything else,” Robles said. “But the emotion that exists in the town is incomparable. I had never seen it.”

At the time, the country’s supreme court annulled the result and disqualified Superlano — an action that has not been clearly explained — and ordered new elections, which led to Sunday’s opposition victory.

Garrido defeated former Foreign Minister Jorge Arreaza, Hugo Chávez’s son-in-law and the father of his first grandson. Maduro’s top officials participated in Arreaza’s campaign, demonstrating the enormous importance of Barinas as the symbolic capital of Chavismo and the socialist government.

“Barinas is Chávez. It is our stronghold … where we win by one vote, we are going to defend it no matter what the whole world says,” Diosdado Cabello, the ruling party’s first vice president, said Nov. 28.

However, Chavismo not only lost in Barinas, but the opposition considerably increased its advantage: It went from having less than 1 percent of the vote in November to winning by 14 percent points on Sunday.

Shortly after he was disqualified from running, Superlano announced that his wife, Aurora Silva, would run for governor. But the supreme court notified that she couldn’t, either. The same thing happened with Julio César Reyes, another candidate for the position. That opened the way for Garrido, who had already participated as a council member in local elections.

“The imposition of Arreaza’s candidacy reinforced the idea that it is a Chávez stronghold, and it had to be preserved at any cost,” María Puerta Riera, a professor of political science at Valencia College in Florida, said. “Paradoxically, that strengthened Garrido as someone else, a new option unrelated to Chávez, and people turned to vote for him.”

In a preliminary statement, the European Union’s observation mission that was present during the regional elections highlighted the “structural deficiencies” that persist in the Venezuelan elections.

The observers denounced the “widely criticized judicial decisions that have affected the equality of conditions” and other measures such as “the arbitrary political disqualification of opposition candidates, the widespread use of state resources in the campaign and unequal access to the media.”

“It was a concentration of the opposition forces that put aside the egos and made a collective effort to capitalize on the general discontent of the population. One of the great messages of the election is that voting still works,” Trepiccione said.

‘Tired of the revolution’

The candidates campaigned for five weeks, and, as the elections approached, Maduro’s government worked intensively to promote Arreaza’s candidacy.

Senior officials such as Diosdado Cabello, considered the second in command, after Maduro, and symbolic figures who do not usually participate in regional elections such as María Gabriela and Rosinés Chávez, daughters of the Venezuelan leader, were also in Barinas during various campaign events.

In addition, the government militarized the city and supplied the state with fuel fleets, water trucks and propane gas for household use — all things have been in short supply for months.

“All of this showed that they could always solve our problems, but they never wanted to,” Yanny González, a 50-year-old nurse, said. “We went out to vote angry, because we are tired of the revolution.”

The use of public buildings, vehicles and state facilities to carry out campaign acts was widely denounced by opposition leaders and some electoral authorities.

Experts see a maturing of the Venezuelan electorate as a fundamental element in the recent opposition victory.

“It’s no longer enough to refer to Chávez to win votes. Increasingly, people are demanding real solutions for the horrible conditions they face in their daily lives,” said Geoff Ramsey, director for Venezuela at the Washington Office on Latin America, or WOLA, a human rights advocacy organization.

In November, Venezuela completed four consecutive years of hyperinflation that has pulverized the salaries of Venezuelans. The government ordered another monetary reconversion — the third in the last 13 years — eliminating six zeros from the value of their currency, the bolivar.

In addition, the economy has become dollarized, so it’s common for businesses to sell basic items at U.S. dollar prices, which makes it more expensive for buyers.

González, the nurse, described how the economic situation and shortages are having an impact. “We treat patients with Covid without the protection or necessary supplies,” she said. “In our general hospitals, there is only water three or four hours a day, and sometimes the power goes out. It’s like a death sentence.”

Apart from the acute economic crisis and the erosion of civil and democratic freedoms — which led the International Criminal Court to investigate the government — Venezuela has seen the collapse of its most basic services such as electricity and drinking water, a growing problem in regions like Barinas.

Despite having won 19 governorships in November, multiple polls indicate that more than 80 percent of the population rejects current government policies.

However, as political analyst Carmen Beatriz Fernández pointed out in a recent article, the 20 percent who support the government “have control of 80 percent of the country’s institutions,” which explains the disadvantages for the opposition in most electoral contests.

For researchers like Colette Capriles, Chavismo’s historic moment and its electoral dominance has already passed, and now it “has to adapt to this reality, which causes tensions to intensify between those who believe that Chavismo should dedicate itself to recovering the lost majority and those who believe that it’s possible to continue governing as a minority outside any democratic precept.”

“The eventual internal ruptures of Chavismo will not magically produce triumphs for the opposition,” she said. “In fact, the opposition lost at least 10 governorships in the last elections due to its own internal disputes.”

The key to electoral success

Capriles, as well as other experts in Venezuelan politics, attributed the opposition’s victory in Barinas to three factors: the opposition leaders’ willingness to participate despite the electoral system’s imperfect rules and the ruling party’s advantages; the unity of the opposition parties around a single candidacy; and local political work by the state’s residents.

“It demonstrated that through the mobilization of public opinion you can connect with a wide sector of the population that yearns for change, and this can achieve important victories in electoral matters,” Phil Gunson, an analyst at Crisis Group, said.

It’s also significant that the losers in Sunday’s election were not only on the Chavista side. Candidates who attempted to fragment the opposition vote were punished with negligible percentages of support.

“The so-called minority opposition of the candidacies of Claudio Fermín and Adolfo Superlano were ridiculed,” Capriles said. “It’s another good news out of this election: It’s possible to rebuild unity and counterbalance the divisiveness that these parties fostered.”

One of the effects of the elections in Chávez’s homeland could be the resumption of negotiations between the ruling party and the opposition.

Maduro wants to have the ability to communicate with countries that recognize the opposition as the managers of the country’s assets and that could influence the re-establishment of negotiations, Capriles said.

The Maduro government has already advanced legislative initiatives that address issues that were discussed in conversations that took place in Mexico, such as the need for judicial reform.

“If the opposition could read the Barinas results well, it would have to resume its unitary discussion and its unrestricted support for negotiation, in addition to generating a credible agenda for joint negotiation with the government, recognizing that it’s possible to start an agreed re-institutionalization process,” she said.

Recently, various government officials have warned Garrido, the governor-elect, that they will “protect” that state, which makes many fear that a parallel government could be installed (as has already happened in other regions where the opposition won) that would weaken their management, which has not even started.

“They had to accept the results because the advantage was too wide, and the people are very disenchanted,” Garrido said. “Now they come with threats, but I am open to dialogue because we have to solve people’s problems. Power is circumstantial; the important thing is to work for change.”

Meanwhile, residents in Barinas like Robles and González are betting on change.

“Even if we do not get fuel again, nor do they send us food, we will continue here,” Robles said.

An earlier version of this article was originally published in Noticias Telemundo.